In this project, we were essentially assigned a country represented in the United Nations and tasked to reenact a conference representing our assigned country's political stances regarding the Venezuelan refugee crisis. China, Pakistan and U.K. wrote resolutions for Venezuela and their economical crisis, and various countries wrote amendments to be voted on and implemented into these resolutions. Leading up to the project we took notes on our country's policies and then wrote a "Policy Paper" to outline and clearly explain our country's stance on the matter. Alliances and rivalries were formed as well. 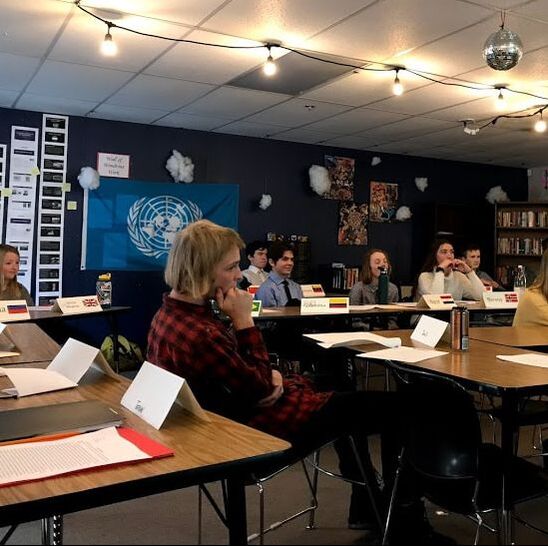 Venezuela is currently in the midst of a socioeconomic crisis. In 2010, former president Hugo Chaves declared an economic war due to rapidly increasing shortages in their country. As current Venezuelan president Nicolas Maduro took office and was left in charge of the country’s economic maintenance, the economy essentially collapsed and the crisis intensified especially after oil prices fell drastically in 2015 and oil production was lackluster as a result of lacking maintenance and investment. This was a major downfall as Venezuela’s economy is partially dependent on oil sales. Since then the government has been dealing with the crisis by denying its existence and violently resisting any sense of opposition, also resulting in a common occurance of extrajudicial killing enacted by the government, with 6,856 reported casualties since 2019. There have been numerous anti-government protests revolving around chronic food and medicine shortages, political corruption, human rights violations, unemployment, authoritarianism, and a massive deterioration in productivity. Due to these political downfalls, nearly 15% of Venezuela’s population has fled and migrated to other countries, posing a problem for those neighboring countries. Evidently, the country’s overall state is consistently deprecating and it needs to be solved for the wellbeing of its citizens, the stability of the state and the future of Venezuela in whole.
North Korea has a strong relationship with Venezuela, and it has been growing more and more developed and well defined under the presidencies of Hugo Chavez and Nicolas Maduro, and in the 2019 Venezuelan Presidential Crisis, North Korea has been one of the few (22) countries to recognize Maduro as the President of Venezuela. North Korean ambassador Ri Song-Gil has expressed that the North Korean state will continue to strengthen relations with Venezuela. One of the most realistic solutions for North Korea to implement is to financially support their economy and take actions to help their working conditions thrive. If North Korea truly wants to develop and strengthen their diplomatic relations with Venezuela, they should help repair the country by investing in major financial assets and industries that will help the country thrive rather than suffer.
Citations
Shim, Elizabeth. “North Korea Throws Support behind Venezuela's Maduro Regime.” UPI, UPI, 28 Jan. 2019, www.upi.com/Top_News/World-News/2019/01/28/North-Korea-throws-support-behind-Venezuelas-Maduro-regime/3891548692065/.
Ellsworth, Brian. “Insight: Post-Election Hangover Looms for Venezuela Economy.” Reuters, Thomson Reuters, 14 Feb. 2012, www.reuters.com/article/us-venezuela-economy-election-idUSTRE81D0RA20120214.
Loughman, Brian, and Richard Sibery. Bribery and Corruption: Navigating the Global Risks. Wiley, 2012

Personally, I think the most interesting thing about this project was the conference itself, specifically the back and forth between the speakers and the commentators. For example whenever Pakistan was commenting on a speech, those comments were insightful, articulate and curious, which not only furthered the conversation but allowed it to follow a direction that made the conference nothing short of captivating. I think I grew in an area of political awareness. Being assigned the nation of North Korea, it was necessary for me to be apprised of the current state of the country, as well as the relations it had with others. For instance, if I hadn’t been dilated on the political and social aims of North Korea, I never would have been informed of the fact that they’re threatening Japan by firing intercontinental ballistic missiles into the Sea of Japan and shaking any sort of confidence regarding their well-being that they had. For this first conference, I honestly had no sense of preparation. My “speech” was lackluster, to say the least, thus I was hesitant to participate at all or even add myself to the speaker’s list. In the second conference, I have the fullest intent to be well equipped in terms of being prepared, and I intend on developing a deeper sense of the circumstances in the conference as well as the background information required to adequately participate.